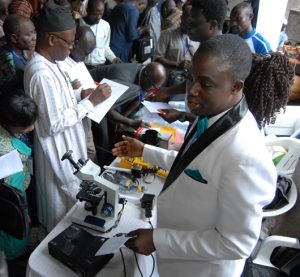 Pig production and its development prospects are faced with challenges for farm operators and other players along the piggery sector. Most of the pig farmers in Nigeria are seen to be making use of traditional methods and practices for the process of mating and detecting the ovulating cycles of pigs. Hence, there is a need to develop technology that handles this process with a scientific approach.

YPARD over the years has promoted innovations and research for development among young people and these have spread across countries and regions with strong evidence from the Young Agriprenuer Projects (YAP).

In agricultural research and innovation for development, there is need for collaboration and cooperation and this was exactly what happened between the Real People Concept and Dania Farms in Agege Lagos State and witnessed by the Young Professionals for Agricultural Development (YPARD) – a proud supporter of this collaboration.

Tokurah Majid, a representative for YPARD Nigeria attended the event which was held at Agege in Lagos Nigeria to see and endorse the research for development process involved for rapid livestock reproduction in Nigeria and attest to the requirements for accurate estrous and ovulation detection, accurate pregnancy detection, semen collection, processing and artificial Insemination of pigs through a modern proven technology. This technology, called Draminski Technology, is used to predict and detect accurately the estrous cycles in pigs and testing available technology for artificial insemination in pigs and pregnancy detection.

Agriculture is no doubt a lucrative business but research has shown that pig farming is another aspect of livestock farming that attracts investment opportunities and increases the income of farmer-entrepreneurs as pig feed is cheap, readily available and pigs are known to feed on any substance appealing to them.

In this context, Nigeria has one of the largest geography and demography market and the biggest pig farms in sub-Saharan Africa, precisely Lagos. This cluster of pig farms is situated in Oke Aro Farm Estate, Lagos where there are over 3,000 pig farmers engaging in the business of pig farming. This is managed by the Lagos State Government with the inclusion of purchasing and renting of pens.

Technology in this sector is believed to be of help and great impact to the development of the livestock sector in the country. Hence, the need for improvement in various areas of animal reproduction via the use of technology for rapid livestock multiplication.

Pigs cycles are too often detected through inaccurate predictions and assumptions made by farmers where farmers predict wrongly about a pig being pregnant. This traditional method has its own disadvantage in term of ineffectiveness which was revealed at the test carried on pigs using the Draminski pregnancy detection device.This new technology showed that at least, one of the pigs at the Dania Farms in Agege, Lagos State were not pregnant as predicted.

Technology and collaboration – The event in summary

During the first phase of  2017, Real People Concept Research for Development (R&D) projects targetted livestock development in Nigeria and a Memorandum of Understand was signed between Real People Concept and the Dania Farms. The ceremony had in attendance Dr. Adeyemi, the Deputy Director of Veterinary Services who led a 3-man delegation to represent the Lagos State Ministry of Agriculture, YPARD Local Representative, other pig farmers, farm managers and intending livestock owners.

In a speech made by Hon. Osigwe, the Chairman and Managing Director of Dania farms, he expressed his delight to contribute to a technology that targets livestock development in Nigeria. He re-affirmed the commitment of his farm to ensure availability of 6 sows and 8 gilts available for further experimentation of the first phase of this study.

Delivering the problem statement, Mr. Oloruntobi Olusegun, the Project Development Executive for Real People Concept highlighted the increasing rate of failure recorded in the usage of Estrous Synchronizers on pigs by Nigeria farmers. He further analyzed the high cost associated with both estrous synchronization and artificial insemination which have recorded less than 15% success rate. He related the failure rate to several factors which are yet to be addressed by Nigerian livestock farmers due to limited or lack of access to the right modern technology.

Basically, the study and project were purposively exploring a convenient estrous detection method as an alternative to failing estrous synchronization in pigs (in terms of Cost and Efficacy); explore an easy approach to artificial insemination in pigs; research the possibility of increasing sex ratio of piglets and reduce farmers’ anxiety during breeding.

The Draminski estrous and pregnancy detector’s effectiveness and functionality were demonstrated to all the attendees of the launching event. Afterward, farmers and farm managers present were trained on how to handle and use the device for subsequent operations.

The Rapid Livestock Multiplication Project called the Draminski estrous and pregnancy detector is a trending project innovation spreading gradually across farmers and within farmers in the livestock sector.